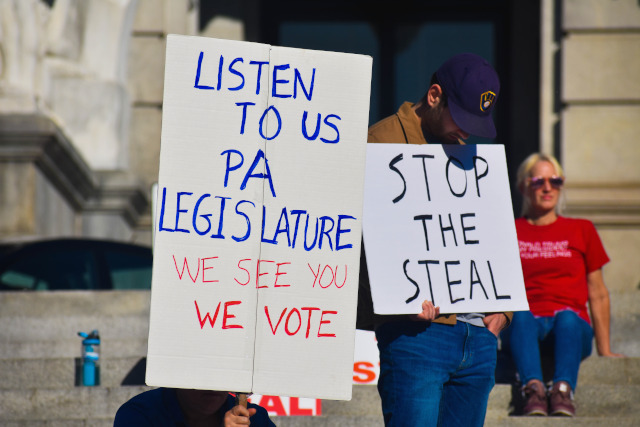 (Patriot Insider) – A full forensic audit appears to be more realistic every day for the state of Pennsylvania. After State Senators Doug Mastriano and Chris Dush along with State Rep. Rob Kauffman visited the Maricopa County audit, all signs are pointing to an audit becoming a reality in PA.

State Sen. David Argall is the head of a committee that oversees elections and he has just recently told media outlets in the state that he is in favor of an audit despite the fact that state officials like corrupt Governor Tom Wolf and federal officials insist everything was secure and there was no fraud.

If you recall, President Trump held a commanding lead in the state on Election Night with nearly 800,000 votes. When the world went to bed it looked as though PA was an easy win for the President. Then, the next day everything unraveled and miraculously Joe Biden not only closed the gap but took the lead, ultimately being handed the win in PA.

Of course, this is all impossible. The left wants us to believe that it’s because Biden voters primarily did mail-in voting while Trump supporters went to the polls. Even if that were the case, the numbers are still totally impossible.

The state legislature is right to want to examine what happened in PA and Democrats should be supportive of the opportunity to prove Biden won fairly, though we all know he didn’t and that’s why they are fighting all audit efforts all around the US.

This audit will prove the Pittsburgh and Philadelphia ran close to 525,000 ballots through the system between 1 AM and 5 AM on the morning of November 4th. It’s definitely going to get interesting. https://t.co/ssQpM0XE89

Sen. Argall told the Capital-Star the audit is now a “very real possibility.” The report also noted that he is considering subpoenas for ballot information but has yet to determine which jurisdictions to send them. Understandably so. The entire state was a mess on Election Day.

“There are a lot of things under consideration right now, and I told them to check back in a week or two, and we hope to have some more detail,” he told the outlet after meeting with others who support the audit on Thursday.

Pennsylvania, like Arizona, is pursuing a full-scale audit despite the fact that bogus “post-election audits” showed that there was apparently no widespread fraud in either state.

In contrast to Democrats’ claims that there was no fraud, there were dozens of lawsuits alleging election fraud and voting irregularities in the state and around the country, most of which were unfairly rejected by courts without even considering a shred of evidence.

The audits are Americans’ last hope for election integrity in the US and the Democrats should have nothing to fear if there were, in fact, no fraudulent shenanigans.

Both Arizona Senate President Karen Fann and PA State Senator David Argall have insisted that the purpose of the audits are not to overturn the 2020 election but to restore Americans’ trust in the system and to influence voting laws to ensure better security and integrity in the future.

“The Electoral College has spoken. You know the president has been sworn in. I understand that’s a reality,” Argall said Friday during Spotlight PA’s Capitol Live event.

Lawmakers in PA are currently working towards passing voting reform legislation and Argall says that the audits would only help to shape those policies.

“Do I have 100% confidence… that everything was perfect? No, I’d really like us to take a detailed review of that,” Argall said. “That’s why we’re looking at changing pieces of the election legislation, and it’s also why I think it wouldn’t hurt at all to go back, do that audit, and say, ‘How exactly did that work out?'”

That seems perfectly fair and reasonable and yet Democrats are terrified of these audits. It’s pretty obvious why that would be. Let’s hope Republicans in Pennsylvania stick to their guns and get an audit underway as soon as possible.